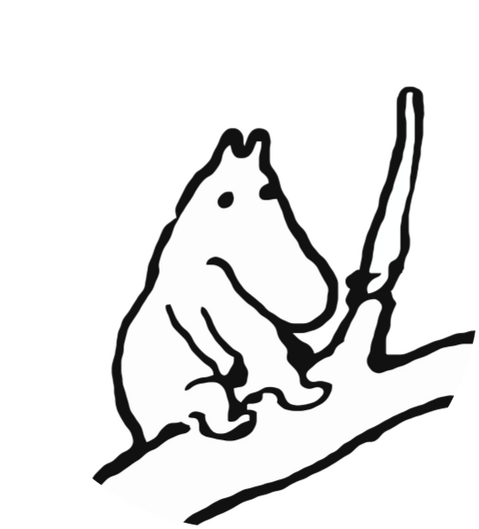 I'm Paul, a game & level designer based in France.
I'm currently working at Don't Nod.Here are some of the previous projects I worked on.
Most of my non-professional games are available on my Itch.io page. 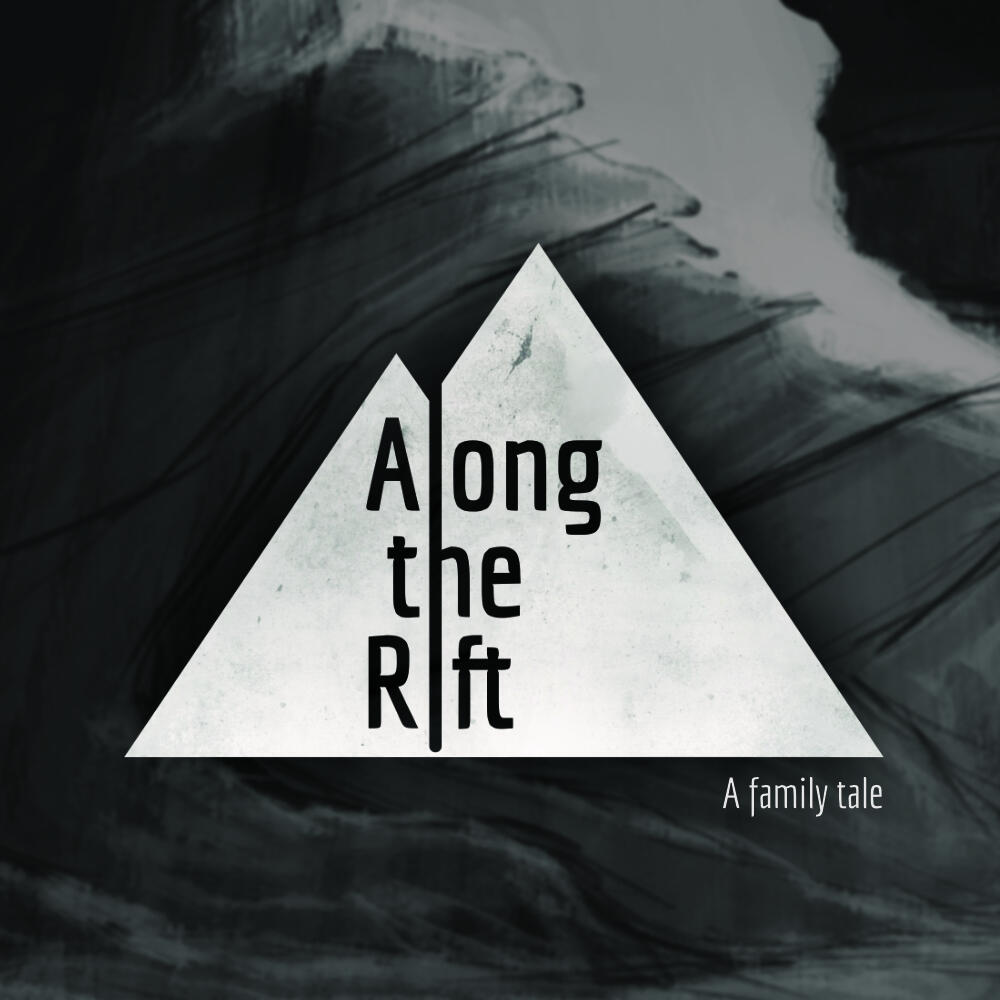 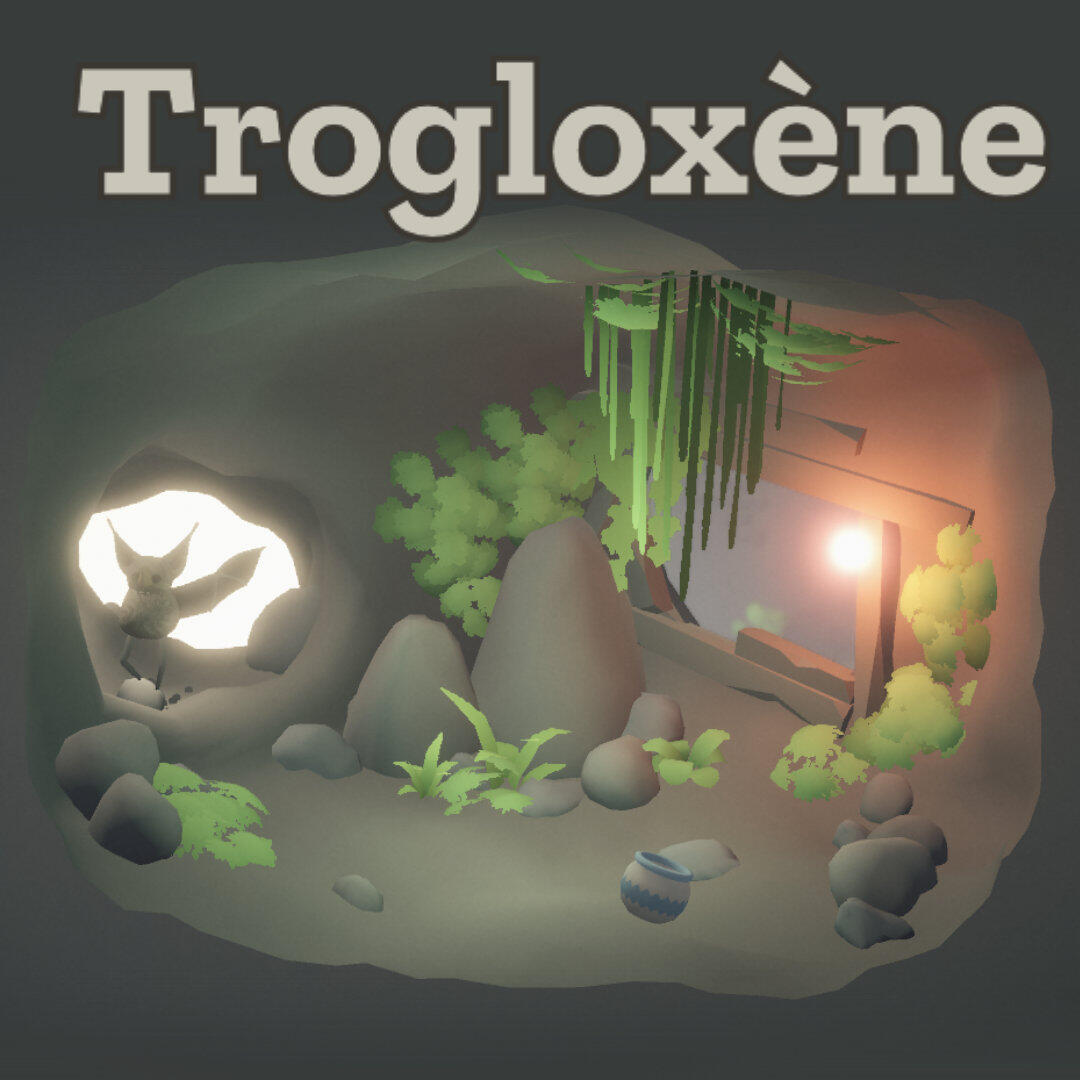 Learn to fly as a bat, and wander at your own pace

A golem made of paper save its town from the flood 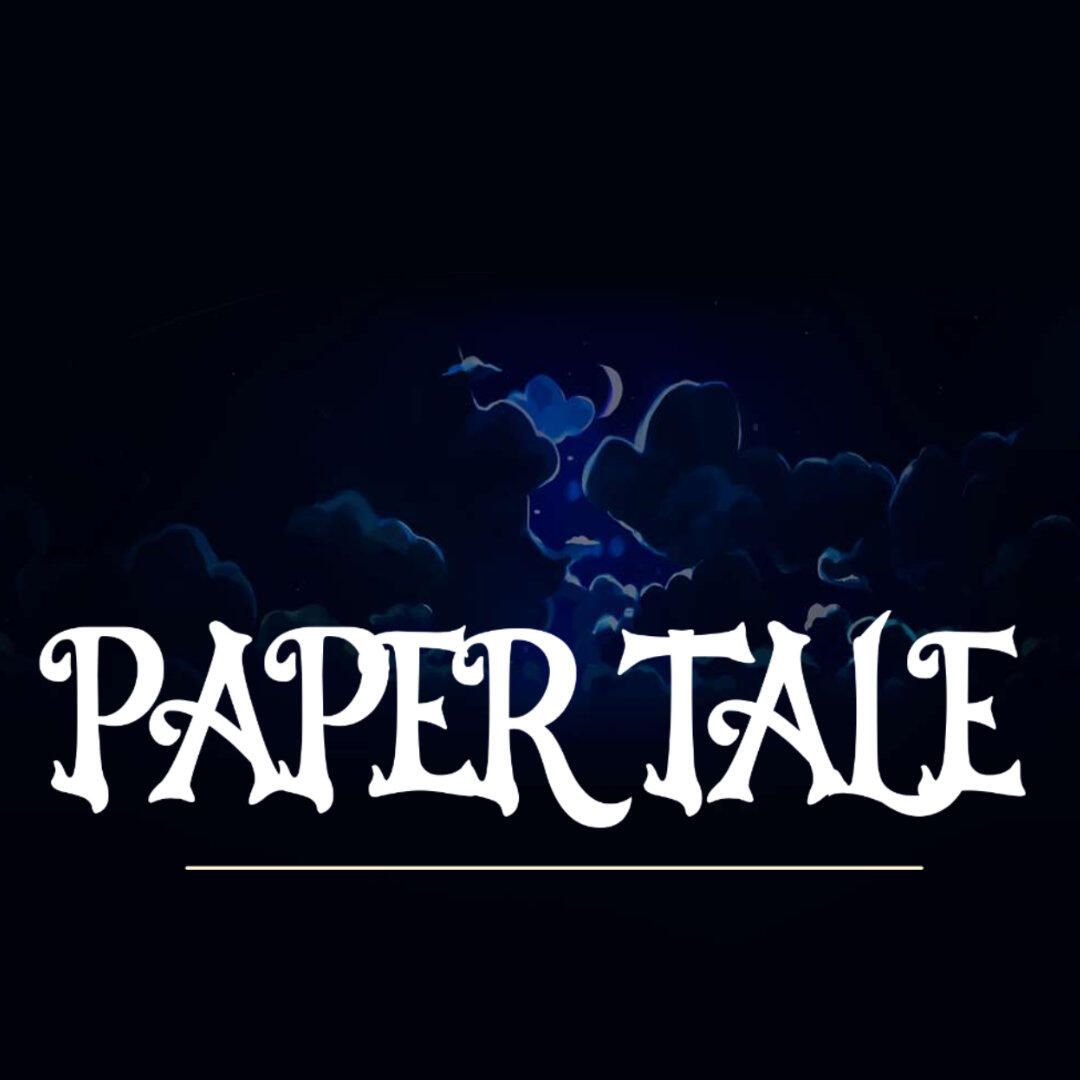 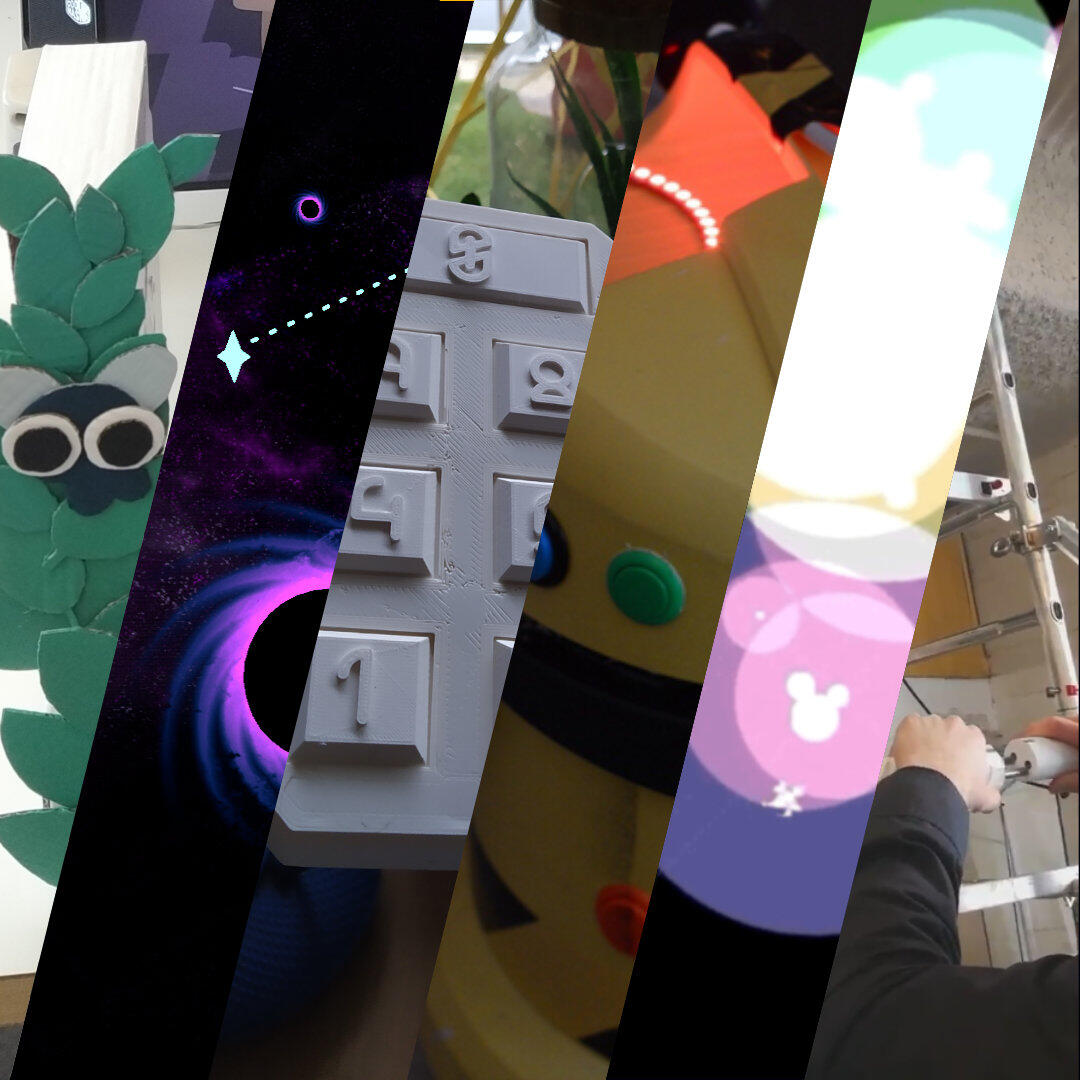 A selection of some of the alternative controllers I made

Along the rift is my end-of-studies game, and I work on it within a team of 11 other students.Julia Clément and I are the two game designers of the project, I do some narrative design but I mainly focus on the system and the level design.

It is a narrative adventure game, where you play as a young girl that felt in a rift, seeking help from her parents by following their advices to get out.In this coming of age story, our main character will have to face her rich imagination, wich can amplify her reality but also help her face her most frightening fears.

We are not working on the entire game, but on a vertical slice, starting at the end of the introduction, and ending at the end of the first chapter.
You can see here the timeline of the entire game, and of the vertical slice, alongside a document explaining our stress system, wich allow us to change dramatically the feel of the game based on how our main character is feeling at any given time.

Here is a mockup for the dialogue interaction I designed. 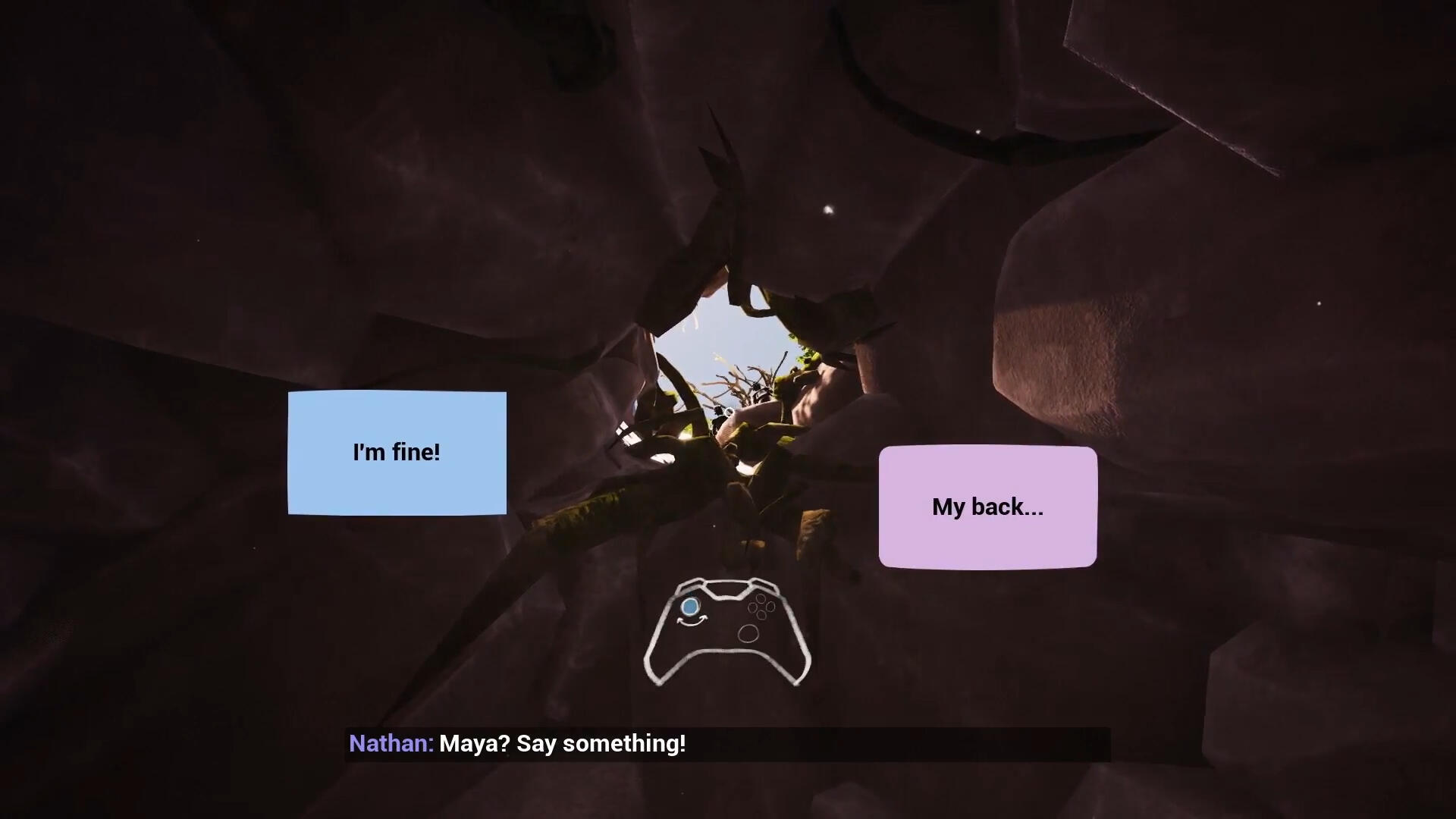 We regularly showcase our work to teachers and professional of various studios, to get their feedbacks. Here is the last presentation we did at this point.

Trogloxène is a game I made within a team of three, alongside Dorian Fillâtre for the visuals, and Grégoire Monesma for the sound design.I was the game designer but also the programmer on this project, I did the character's procedual animations, and took care of the UI.

It is a game about learning to fly as a bat, in a complex underground environment.
The player can wander they want, there is not a main path to follow, and at first there is no defined objective. There are many places to discover, and the only real challenge is to learn to fly with the bat.
Here are some in game screenshots.

You can control each wing of the bat individually, wich allows for a wide range of movements.

I wanted the game's UI to be very discreet and minimalist.The dots that appear at the bottom of the screen when the bat lift off indicates how many wings strokes are available.
The little half circle jumping from dot to dot indicates wich wing to stroke next, to get a velocity bonus.
The gauges at the right and left corner fill up when the player hold down a wing button. If they release this button when the gauge is at its maximum, they'll go farther.

It all started with a prototype I made for a design class at ENJMIN.
Then, we decided with Dorian and Grégoire to pursue it during our summer.

Since the game takes place in a vast and complex environnement, I created a 3D map for my team.
Each room is there, with a short description wich explains were its doors leads, how hidden they are, and how the camera will work in this place.
It was made to be printed and displayed in a A0 format, but here are some extract of the document.

Paper Tale was a game I made during my first year at ENJMIN.It is an ambient game, where you play as a paper golem, saving its city from the flood.

I worked as the game designer of the team, and I focused on the system and level design.
I especially enjoyed setting up the multiple cameras in the game, wich make for a very smooth experience.Here are some example of the 2D maps, the greyboxing, and the design documents I made for my team.

More infos on the game, along with more in game screenshot, a trailer and the game itself, are available on its itch.io page here:

A selection of some of the alternative controllers I made, alone or within teams.

Control a fly using a customised Theremin.
The game also offers the possibility to use an eye tracker, or buttons, in a modular way, so that the experience is as accessible as possible.

Using your numeric keypad, or the homemade controller, discover a space station through its cameras.
Each camera having a different gameplay, and using differently the numeric pad, the player must learn progressively the commands of each of them.
A printable diegetic instruction manual is available to assist.
The game was exhibited during the 2019 edition of the Indiecade europe, at the BNF.

A very demanding robot. If left alone, it will start to yell in the exhibition space. In order not to disturb the visitors, you have to rock it gently, or give it cuddles.
Kärl was created for the 26th edition of Eniarof, with a team composed of another artist and two programmers.

A game designer to be played with a kite-like controller.
To control the ship, you have to pull the two ropes. Colorful shapes will appear and grow. If the ship touches their center they'll explode. It is up to the player to decide to destroy them, or to preserve them.

Control a broken spaceship.
To reach the moon, you have to connect the power to the thruster, but be aware that at full power, the speed of this very powerful ship will kill you instantly…
Play by connecting and disconnecting a custom plug & socket controller.

These CV are out of date, since I've found an internship since then.